As we waited to board The Greyhound bus at Amarillo station, we began to look around in fear at who we could end up sitting with, as well as winding each other up by pointing out possible candidates.

Fortunately, we got a seat together this time, and once again, I got an inquisition on my Queen Elizabeth book by a complete stranger. This annoyed me so much that I got a complex about reading it in public, much to Alice’s delight. During the journey, we stopped at a service station for snacks, but a random guy kept following us around and shooting questions at Alice… “What y’all doing here? Where y’all from?” in a very creepy manner. Bad times when the Greyhound coach becomes your place of safety.

On arrival in Oklahoma City, we made a new friend called Leonard who is the bag loader for the station, and the loveliest man I have ever had the pleasure to meet. Leonard took a massive shine to Alice who worked her charm on him, so before long, he had lifted our bags off the coach first, ushered us through the crowd, and directed us to our hostel. What a champ.

The following morning, we woke up bright and early to explore. A taxi driver took us to the National Memorial and Museum, during which time he told us about how much he enjoyed it when he picked up drunk girls, especially two or three at a time – yeah I bet. Then, he said, “be careful in this tornado, yeah” to which we replied, “what tornado?” in total horror. “The one that’s heading directly this way, it should hit us in a couple of hours”. Our thoughts went into a sudden overload, and everything began clicking into place, e.g. why the city was dead, honestly, it was like a ghost town, and flashbacks to the news the night before which had given Kansas City a tornado warning. After we silently freaked out for a few seconds, he cracked up laughing and told us that he’s messing around. What a joker. We never did figure out why the city was so empty, but because of this, he was the only taxi driver floating around all day, so he would always enthusiastically wave at us whenever he drove past. 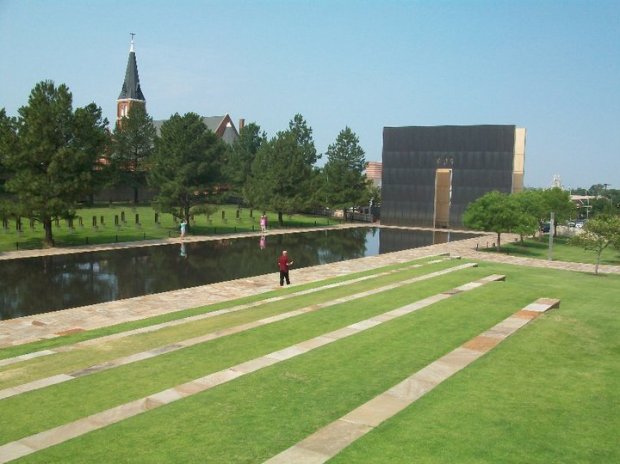 We also wandered around the Myriad Botanical Gardens which gave me horrible flashbacks to those in Brisbane that we visited a couple of weeks before when I was tired and hungover. The free map was absolutely useless and caused me to throw it down in a temper tantrum before storming off. Not my finest moment.

However, we did stop for a nap here in Oklahoma because it was ridiculously hot, and we do love our naps. We spotted a rather good looking runner in between snoozes and decided that his name was probably Ryan. This evolved into a fictitious story that Ryan was a bartender, but he had a heart-wrenching passion for acting and wanted to break into the business. I wanted to add that he was in Oklahoma to look after his sick Nan, which is why his career was on the back burner at the moment, but Alice said I was going too far and was having none of it.

I would say that this nap ranked in second place during the trip, with number one going to the one in Sydney’s Botanical Gardens. The weather was beautifully warm, but not too hot, the sky was clear blue, the grass was freshly cut, and we had just had lunch in front of a lake view. Perfect. Or it was until two Italian guys approached us and asked if we were German. Do we sound German?  Then, one of them asked us if we had any tissues, to which I replied, “no sorry, but I have some baby wipes”. “BABY, YOU HAVE A BABY?” he shrieked while looking around for it. Oh, that made us laugh. 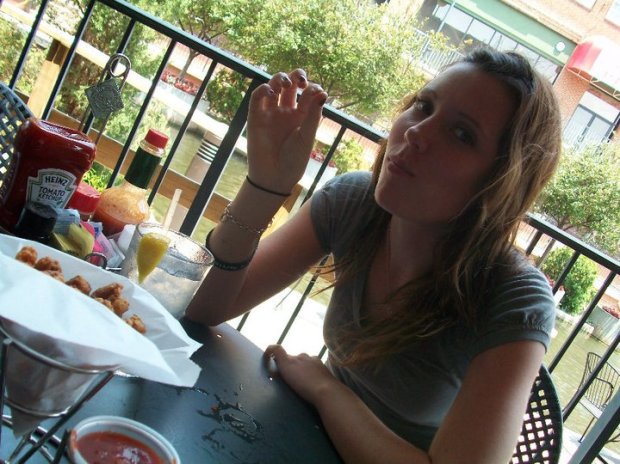 Finally, we went downtown during our day in Oklahoma City to a place called Bricktown, which is a beautiful area on the river.